In the fall of 2019, Dropbox launched a new desktop experience, which consists of a new desktop app, improvements to Dropbox in the system tray/menu bar, and the Dropbox folder in File Explorer/Finder.

This guide provides an overview of the latest changes, to help IT admins transition their teams to the new desktop experience and stay up-to-date with the latest features and integrations. 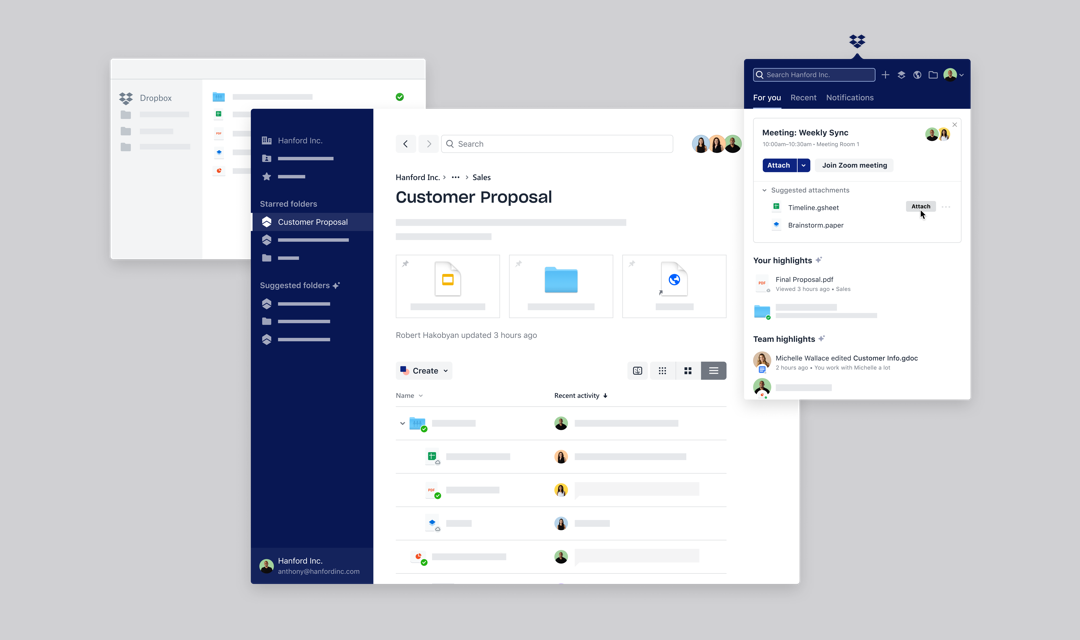 The new desktop app displays all of the files and folders in the Dropbox folder in File Explorer (Windows) or Finder (Mac) and on dropbox.com, but in a more organized and powerful workspace.

Users can simply drag and drop files and folders to add them to the app. The content appears in the Dropbox folder and is synced to dropbox.com and anyone those files are shared with. 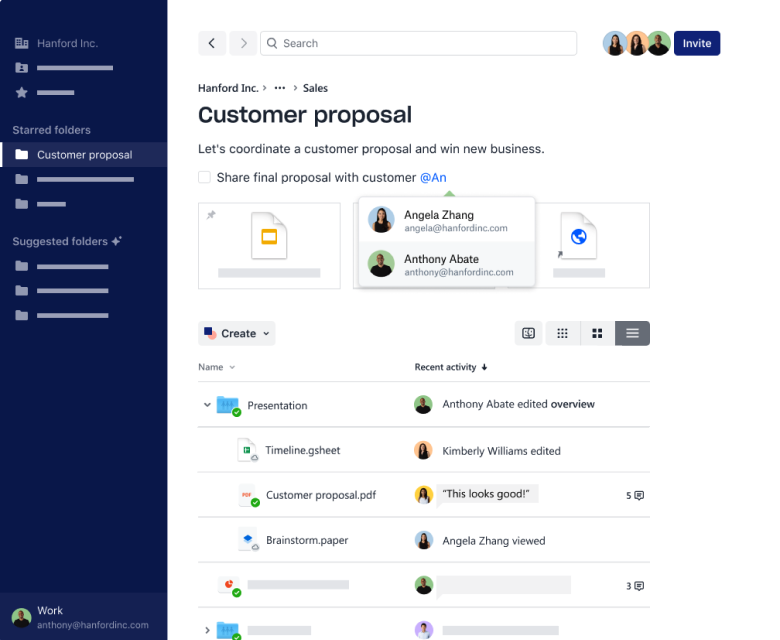 The new Dropbox desktop application is already available to any users utilizing the latest Windows or Mac desktop client builds.

When users start interacting with the new desktop experience, they will still see the Dropbox icon in the system tray (Windows) or menu bar (Mac).

The Dropbox folder will also exist in File Explorer (Windows) or Finder (Mac), exactly as before.

Users can continue interacting with Dropbox via the system tray or menu bar. By default, clicking the folder icon there will open the Dropbox Folder in File Explorer (Windows) or Finder (Mac).

Note: Admins can change defaults for the team and individual users can change their preferences to open folders in the desktop app instead of File Explorer or Finder.

Upon first access of the new Dropbox desktop app, users will see the following introduction: 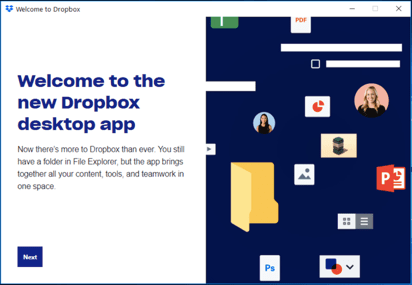 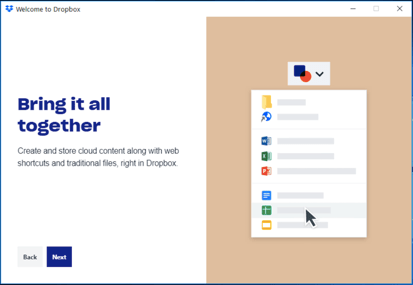 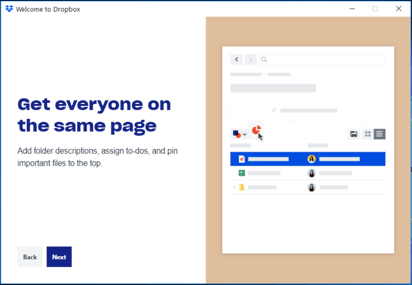 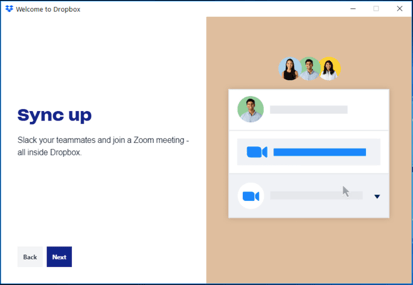 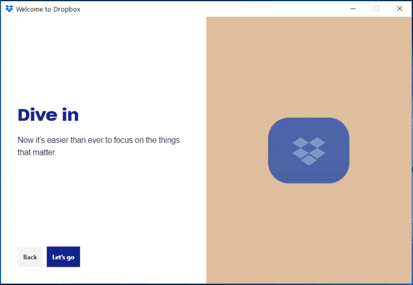 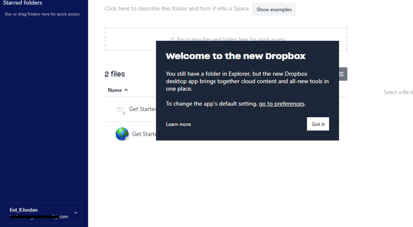 Dropbox in the system tray or menu bar

Dropbox in the system tray (Windows) and menu bar (Mac) is still home to the familiar Recent and Notifications tabs.

Now, users will also see the For you tab, which displays a personalized, intelligent list of files and folders, including Your highlights, Starred content, and calendar events and meetings.

Note: Users can teach Dropbox what files are least relevant by right-clicking a highlight and clicking Dismiss highlight. 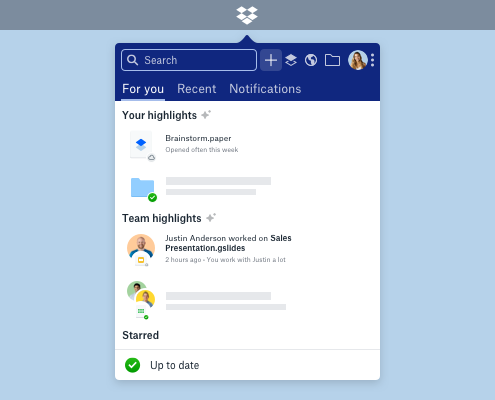 Dropbox Spaces provide an overview that helps users organize content and stay on top of things like file activity, comments, and to-dos.

Adding an overview or certain features to any folder in a Dropbox account turns it into a Dropbox Space. Once added to a folder, features like pins, notes, lists, to-dos, @mentions, and links will appear for any user who opens that Space on the Dropbox desktop app, mobile app, or dropbox.com. 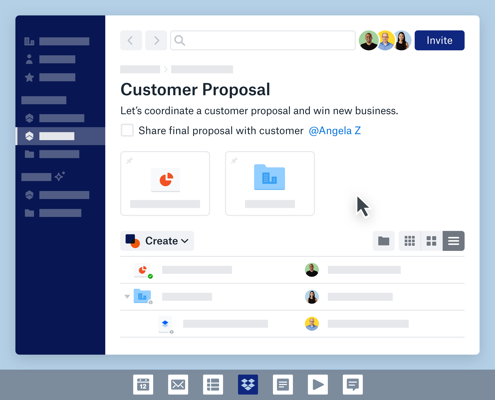 Users can create a Dropbox space by adding:

Dropbox Transfer is a simple way for users to send files they don’t need to collaborate on, such as a finished product or contract to a client.

With Dropbox Transfer, users can:

Team Admins can enable Dropbox Transfer for teams in the Admin console. 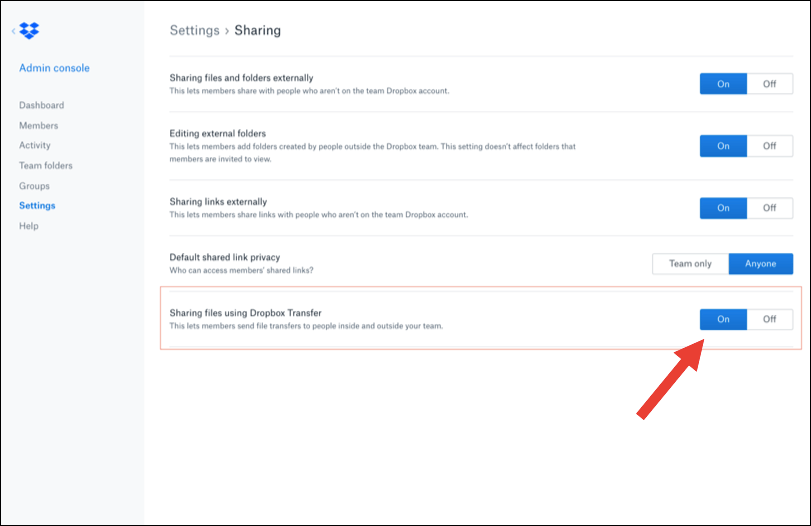 Dropbox integrations with Slack and Zoom help users bring content and conversations together. Admins can manage app integrations for their team in the Admin console.

With the Slack integration, users can share files and send Slack messages right from a Dropbox file. Users can see who has shared their files in Slack, and when and in what channels it was shared. Once connected, this information will appear in the Activity section of the file's preview.

Note: Slack activity will appear without specific details if the owner of the files doesn’t have access to the channel or message it was shared in.

With image search your team can find images faster based on the content within the image, regardless of the filename. 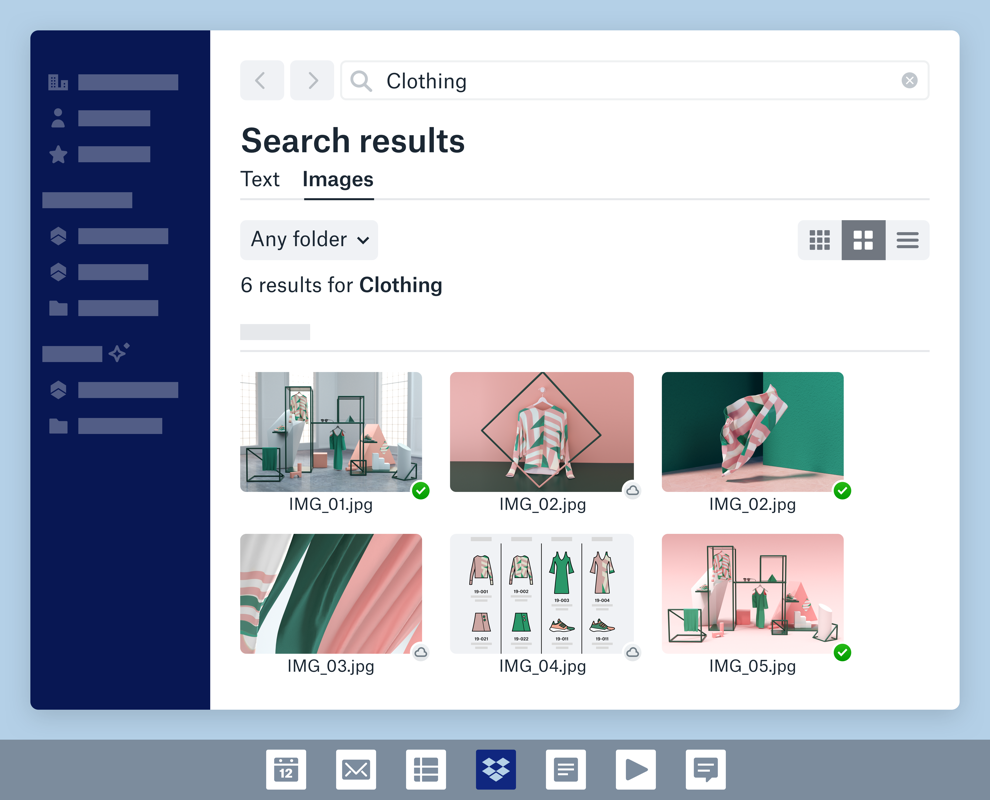 Users can save time spent browsing locations and file names and find images right from the new desktop app or dropbox.com. Your team won’t have to add tags or rename files in order to find images in your Dropbox account.

Many of the latest features of the new Dropbox desktop experience are also available in the Dropbox mobile app. Help your team organize content and stay in sync—from anywhere. 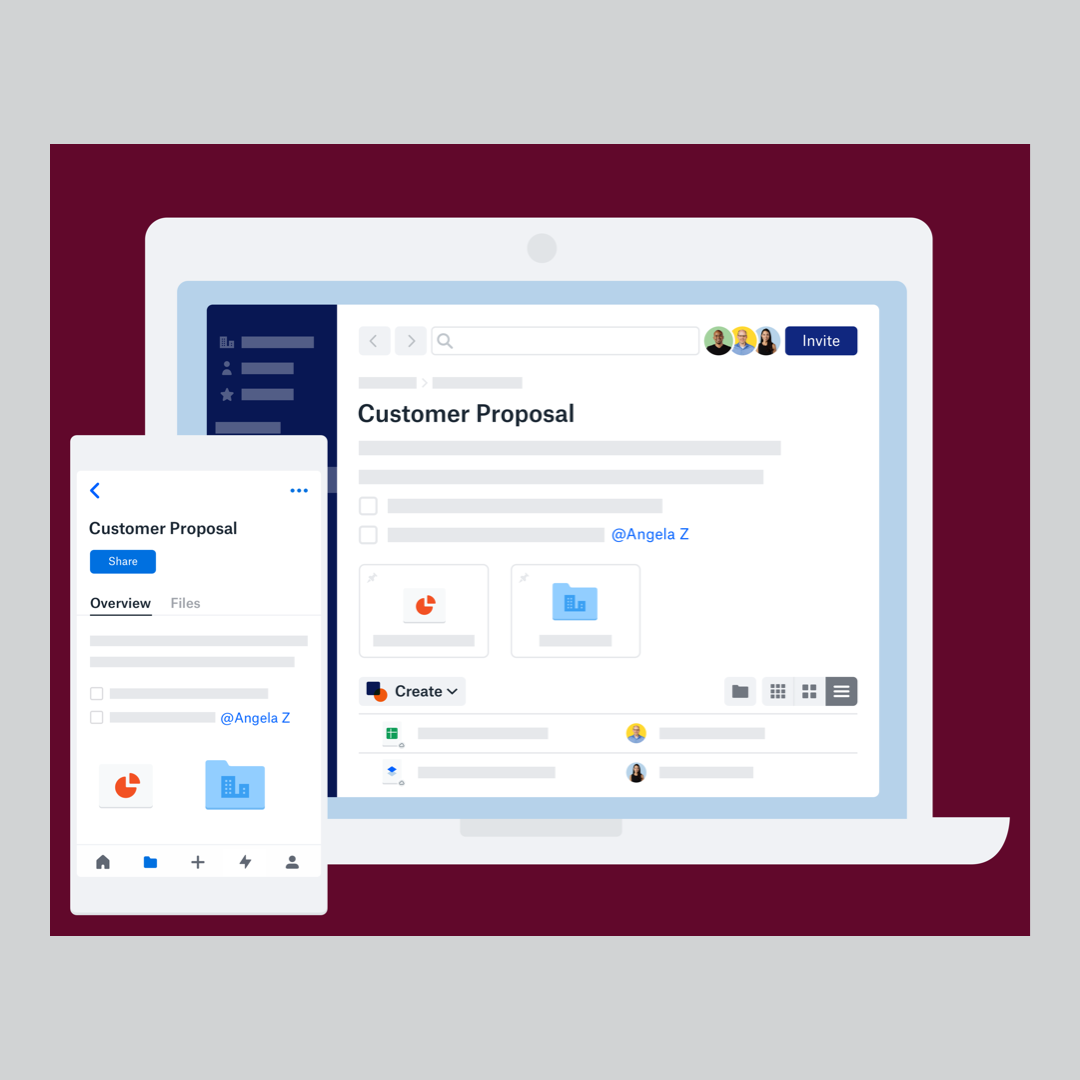 By default, clicking the Folder icon in Dropbox in the system tray (Windows) or menu bar (Mac) will open the Dropbox folder in File Explorer or Finder.

Team Admins are able to configure the Dropbox desktop app as the default file browser view for users. To change the default: 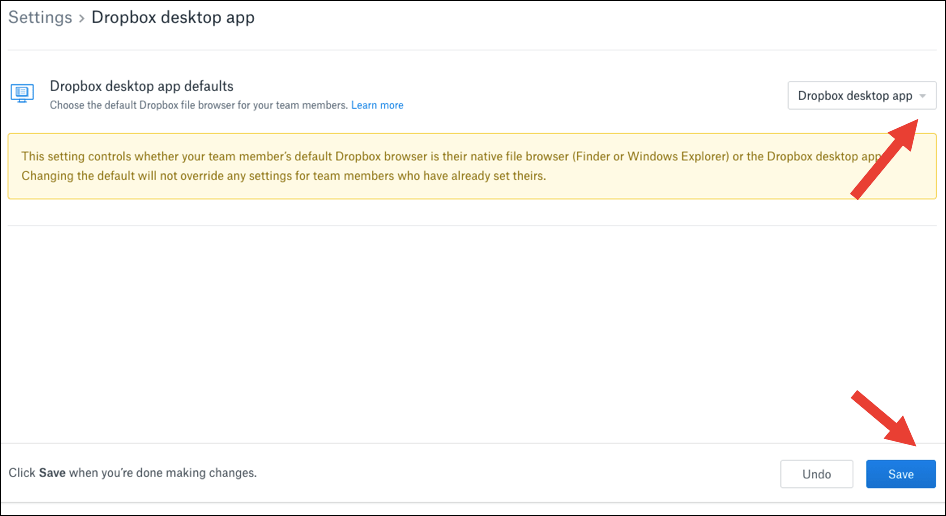 If the Dropbox desktop app has not been set as the default file viewer by an admin, users can discover the app in several ways.

Note: Once discovered, the new Dropbox desktop app will become the default view. Admins can change the default back in their Admin console. 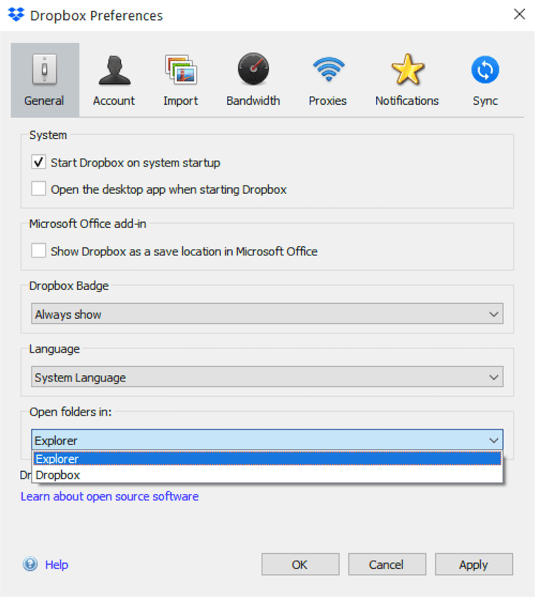 Once an admin enables files and folders to be opened in the Dropbox desktop app by default, instead of File Explorer (Windows) or Finder (Mac), users can access the app in several ways. 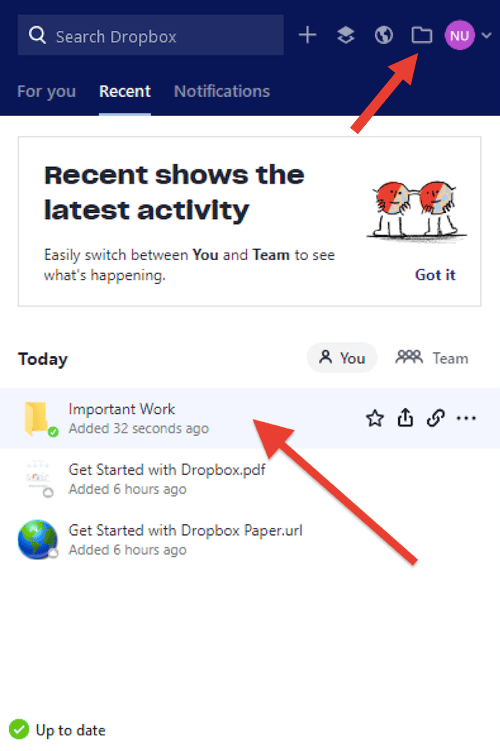 Note: Regardless of the default, users can choose where to open folders from Dropbox in the system tray (Windows) or menu bar (Mac):

Once the Dropbox desktop app has been set to open as the default file viewer by an admin, or discovered by a user, users can override this setting.

To return to opening Dropbox folders in File Explorer (Windows) or Finder (Mac):

No. The new Dropbox desktop app won’t change the way files sync to a computer in any way. Users can continue using the Dropbox folder in the Finder (Mac) or File Explorer (Windows) exactly as they did before.

No. The system requirements for the Dropbox desktop app have not changed. To reduce memory and processor consumption, users can choose to open folders automatically in the Dropbox folder instead of the desktop app.

No. The new Dropbox desktop app is not planned to be made available on Linux.

No. Currently, admins can configure the Dropbox folder in File Explorer/Finder as the default file browser view for users, but cannot disable the desktop app entirely. Users can change this default setting on an individual basis if they prefer to use the desktop app. Admin controls for disabling the app may exist in the future.

No. Currently, there is no way to centrally track usage of the new Dropbox desktop app.

No. Currently, team folders can only be created in the admin console.

No. Currently, admins can't manage commenting from the desktop app.

Users can simply drag and drop files into the folder or Dropbox Space where it is to be stored and synced. There is no “upload” button or process in the desktop app.

Adding an overview to an existing folder converts it into a Space. Text descriptions, lists, @mentions, to-dos, and links can be created in the overview and are visible to anyone the Space is shared with.

No. The overview and features of a Dropbox Space can be viewed on dropbox.com, the Dropbox desktop app, and the Dropbox mobile app.

Yes. Removing the overview, including any pinned content, will convert a Space back into a folder.

Dropbox is always working to expand previewing capabilities on all platforms. The list of currently supported files types is maintained in the help center.

No. Currently, users are not able to move existing G Suite content into Dropbox. However, they can copy and paste content into a new G Suite file that is created in Dropbox.

Please contact your Customer Success Manager or support@dropbox.com if you have additional questions.

Find more resources and insights on equipping your team with a smart workspace from Dropbox.

How to transition to the new Dropbox

What’s changing with the new Dropbox?

How to use Dropbox Transfer

Connect calendar and meetings to Dropbox